An article in the Guardian says that Europe’s carmakers are gearing up to make 2020 the year of the electric car – with a wave of new models launching as the world’s biggest manufacturers scramble to lower the carbon dioxide emissions of their products.

Previous electric models have mostly been targeted at niche markets, but 2020 will see the launch of flagship electric models with familiar names, such as the Mini, the Vauxhall Corsa and the Fiat 500.

The number of electric vehicle (EV) models available to European buyers will jump from fewer than 100 to 175 by the end of 2020, according to data firm IHS Markit. By 2025 there will be more than 330, based on an analysis of company announcements.

The new supply will cater to a rapidly expanding market as demand for petrol-powered vehicles gradually recedes.

By 2026 electric vehicle sales will account for a fifth of sales in the UK, the forecasts show.

New European Union rules come into force on 1 January 2020 that will heavily penalise carmakers if average carbon dioxide emissions from the cars they sell rise above 95g per kilometre.
If carmakers exceed that limit, they will have to pay a fine of £79 for every gram over the target, multiplied by the total number of cars they sell.

The excess emissions bill would have been £28.6bn on 2018 sales figures, according to analysis by the automotive consultancy Jato Dynamics, illustrating the extent of the change required by carmakers over a short period of time.

Jato analyst Felipe Muñoz said there will still be large fines, as companies keep selling profitable internal combustion engine cars and struggle to bring down EV prices to parity with their fossil-fuel peers:

“It is very difficult for carmakers to change manufacturing infrastructure in such a short period of time."

However, some analysts take a more sceptical view of the industry that spawned the Dieselgate scandal, in which Volkswagen and Daimler were shown to have deliberately cheated emissions regulations.
Carmakers successfully lobbied for a rule that means cars emitting less than 50g of carbon dioxide per kilometre are eligible for so-called super-credits, a controversial policy which means that every electric vehicle sold counts as two cars.
That makes it easier for carmakers to meet their targets, even if average emissions from their cars are actually higher than the rules stipulate.

Multiple new electric car models will go on sale just in time to qualify for EU regulations.
– In November 2019 the first of Volkswagen’s ID.3 cars rolled off a new electric production line in Zwickau, eastern Germany, that will be able to produce 330,000 vehicles a year by 2021.
– The first of BMW’s Mini Electric models, made in Oxford, will arrive in showrooms in March. – Vauxhall, owned by France’s PSA Group, will start production of its Corsa-e in January, with sales to begin in March.

Sales of pure electric vehicles will still be dwarfed by those of cars with conventional fossil-fuel engines, as well as hybrids that use both battery and internal combustion power.
However, the electric vehicle surge is likely to contribute to significant price reductions, as carmakers compete for buyers beyond the early adopters willing to pay a premium.

Consultants at Deloitte estimate the market will reach a tipping point in 2022, when the cost of ownership of an electric car is on par with its internal combustion engine counterparts.
Separate research by the International Council on Clean Transportation suggested this was already the case in February in five European countries, including the UK.

In the UK, some drivers anxious about the short range of electric vehicles on a single charge will be put off from buying them until the development of charging infrastructure spreads across the country.
However, scandals such as Dieselgate have made investors “acutely aware” of the need to increase electric sales and comply with emissions regulations, according to Arlene Ewing, a director at wealth manager Brewin Dolphin:

“Brand is all to a carmaker and failure to meet the deadline may adversely affect their brand, reputation and, ultimately, sales; we have seen this before. Consumers tend to be brand loyal.”

Rising demand from consumers has also filtered through to used electric cars: listings website CarGurus found that second-hand prices of some models had risen during 2019.
Tom Leathes, the chief executive of rival car sales platform Motorway, said the market was growing “extremely fast”, despite the complications of selling cars that include separately leased batteries:

“We expect this segment to grow year on year for at least another 10 years as electric’s share of the new car market continues to grow exponentially."

Five electric cars to watch out for in 2020

The “third-generation” mass-market vehicle from the world’s largest carmaker will be swiftly followed by the ID.4 SUV, on the same electric vehicles platform, and production will be carbon neutral, VW claims.

Along with the Mini, the Corsa is one of the first of the UK’s perennial bestsellers to get an electric makeover. It shares its core parts with Peugeot’s e-208, another of the PSA Group’s key superminis.

The latest model from the company that kicked off the electric car race will be the Model Y, a compact SUV that can fit seven people. The Model Y will eventually be built on the same site as a recently announced Tesla battery plant in Berlin.

The Mustang Mach-E is aimed at the booming family-friendly SUV market. The car will be the first all-electric vehicle from the US carmaker, which has been slow to develop new sources of power.

Fiat Chrysler Automobiles has been an emissions laggard because of its gas-guzzling Jeep. The company’s first fully electric car, the redesigned 500 Electric, will be made in its Mirafiori factory near Turin, with a right-hand drive version launched late in the year.

A report in the Telegraph says that a boardroom row has erupted at Aviva over its refusal to trigger a radical break-up plan designed to drag the insurer out of its prolonged stock market slump.

It is understood that some of its top directors have been pushing for the struggling FTSE-100 insurer to consider splitting itself in two amid concerns that it could become the target of an aggressive activist investor.

Senior City sources say such a bold move could boost Aviva’s flagging stock market value by as much as £3bn and see off the possible threat of an activist campaign from a powerful Wall Street agitator such as Elliott Management or Carl Icahn.
The company is currently valued at £16.3bn on the London stock exchange.

A break-up was considered in detail before new boss Maurice Tulloch presented his strategy to investors last month.
Yet despite significant support for a separation to be examined further, the 50-year-old chose instead to keep the company intact and pursue a more conservative shake-up to simplify its existing structure.

Aviva’s share price fell more than 4% as investors reacted badly to the watered-down announcement.
The City was hoping for a much more ambitious approach with its share price lower than it was 25 years ago.

Tulloch wants to reorganise the group from 14 markets to five new divisions.
He also announced plans to invest £1.3bn over three years while protecting the dividend and cutting debt.

Asked about the possibility of a break-up, Tulloch admitted it had been looked at.
“As part of my strategic review, I left no stone unturned”, he said, but added the conclusion was “we’re stronger together”.

However, Paul De’Ath, an analyst at Shore Capital, said Aviva “must try harder”.

The break-up proposal, drawn up with the help of several investment banks, involved carving out the company’s general insurance arm from its life insurance division and either a separate stock market listing for the business, or a sale to a big rival such as RSA.

Legal and General offloaded its general insurance division to Allianz earlier this year and Prudential is in the final stages of carving itself into two parts, one focused on the UK, and another on Asia.

There was support for the move among both non-executive and executive board members.
It is understood the decision not to investigate it further dismayed some of those in favour, and was a major factor in the recent resignation of senior independent director Glyn Barker.

The departure of Barker, the former chairman of outsourcer Interserve, was announced at the beginning of the month and he will leave at the end of December.
It is believed that Claudia Arnia, another non-executive who stepped down on the same day, was also supportive of the plan being explored in more detail.

On Friday Aviva announced that George Culmer, the former finance chief of Lloyds Banking Group, will take over from Mr Barker as senior independent director.

Former UK boss Andy Briggs reportedly pitched the break-up plan to the board earlier in the year when he was in the running for the top job.
He resigned when Tulloch, an Aviva lifer and the former chief executive of its international arm, pipped him to it.

Aviva was created by the three-way combination of Norwich Union, General Accident, and Commercial Union in 1998.
It boasts 33m customers worldwide and 30,000 employees, and has large operations in Canada, Europe and Asia. 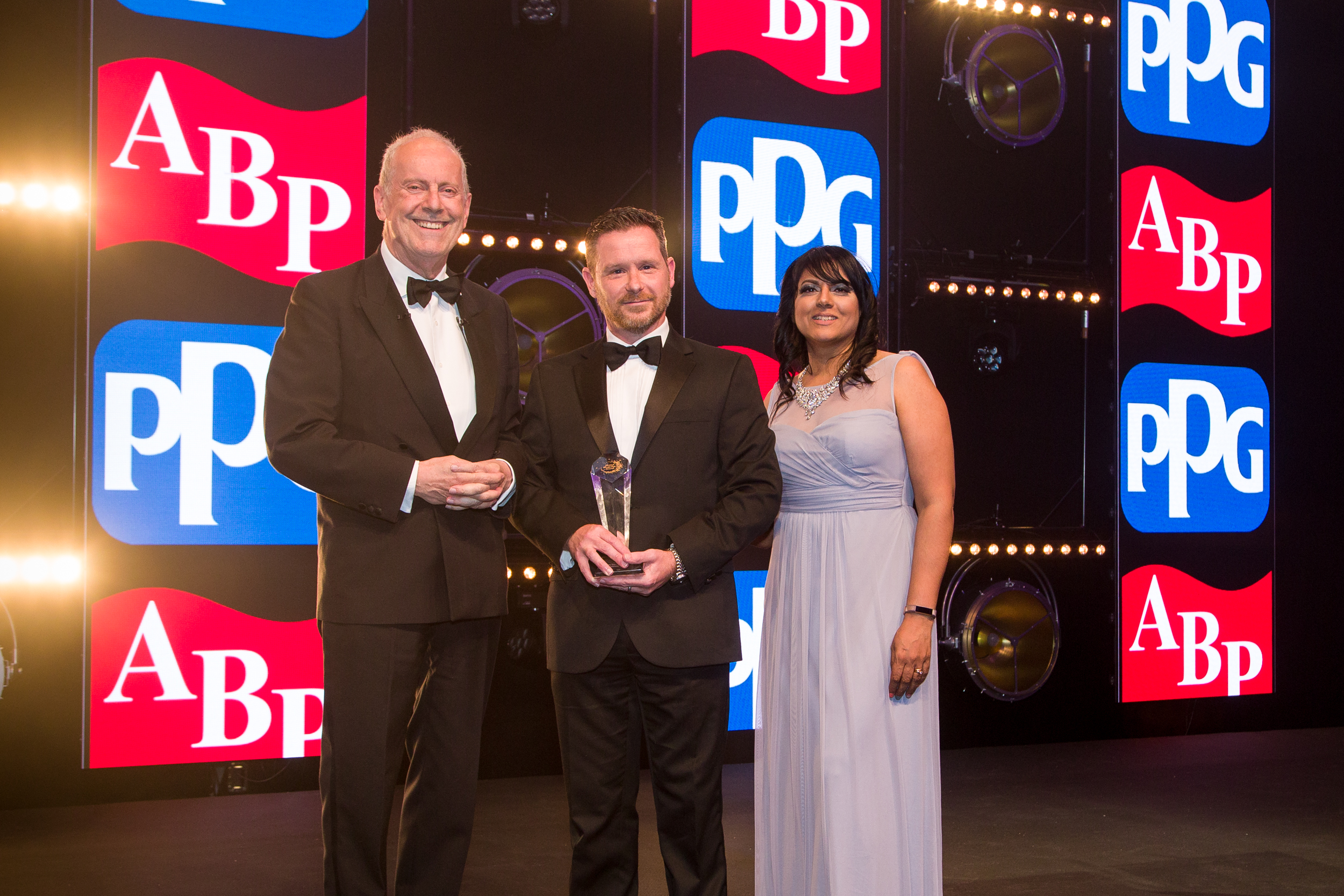 We have had to strengthen our Network to meet the requirements of our growing business to meet and exceed our Customer expectations.

Consistently engaged with our Network to understand their demands and to ensure we deliver what they need to run a successful and profitable business.

1. Ensure we deliver the requirements to run a successful supply chain and ensure our Network are fully supported

2. Encourage and promote the success we are already seeing with apprentices and continue to support AutoRaise to tackle the skills crisis

3. We have completed our Repairer Engage survey recently to understand what we do well and not so well. The good news we scored very well but we need to continue to strive for better for our Repairers and our Customers. Therefore taking that information from the feedback and using that as a template to create 2020 focus. 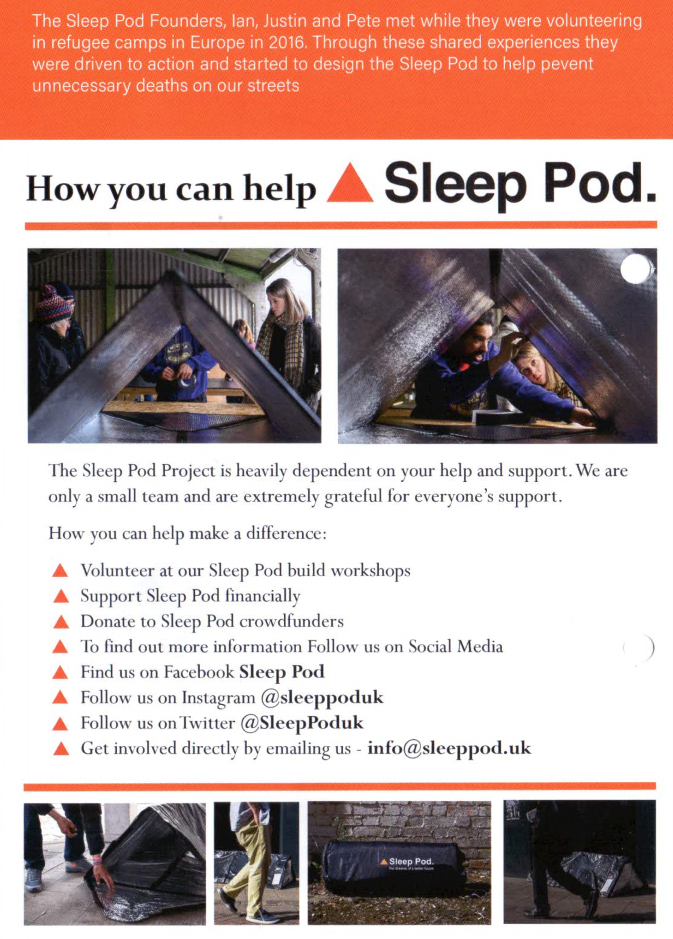 Fantastic news story from the team at Aldridge Accident and Repair Centre (AARC) who, together with friends and local businesses, have raised funds to help homeless people in the West Midlands.

AARC staff and friends – and with the support of local business – have come together to raise funds to produce and distribute to date 364 Sleep Pods for the homeless of the West Midlands.

"SLEEP PODS` is a story that we at AARC – Aldridge Accident Repair Centre have really taken on board," said Martin Collins, Group Managing Director. "In this season of goodwill the homeless in our country and cities are often overlooked and rough sleeping leads to hardship and even death

"Whilst not a solution to the problem of homelessness Sleep Pods can help keep the homeless warm and dry overnight and remember, one Sleep Pod only costs £25 & can save a life!"

Any ABP Club members reading this who are able to help or donate directly can visit sleeppod.org.uk or contact Justin Devereux – Founder at Sleep Pod – on 07576 627772 or justin@sleeppod.uk. 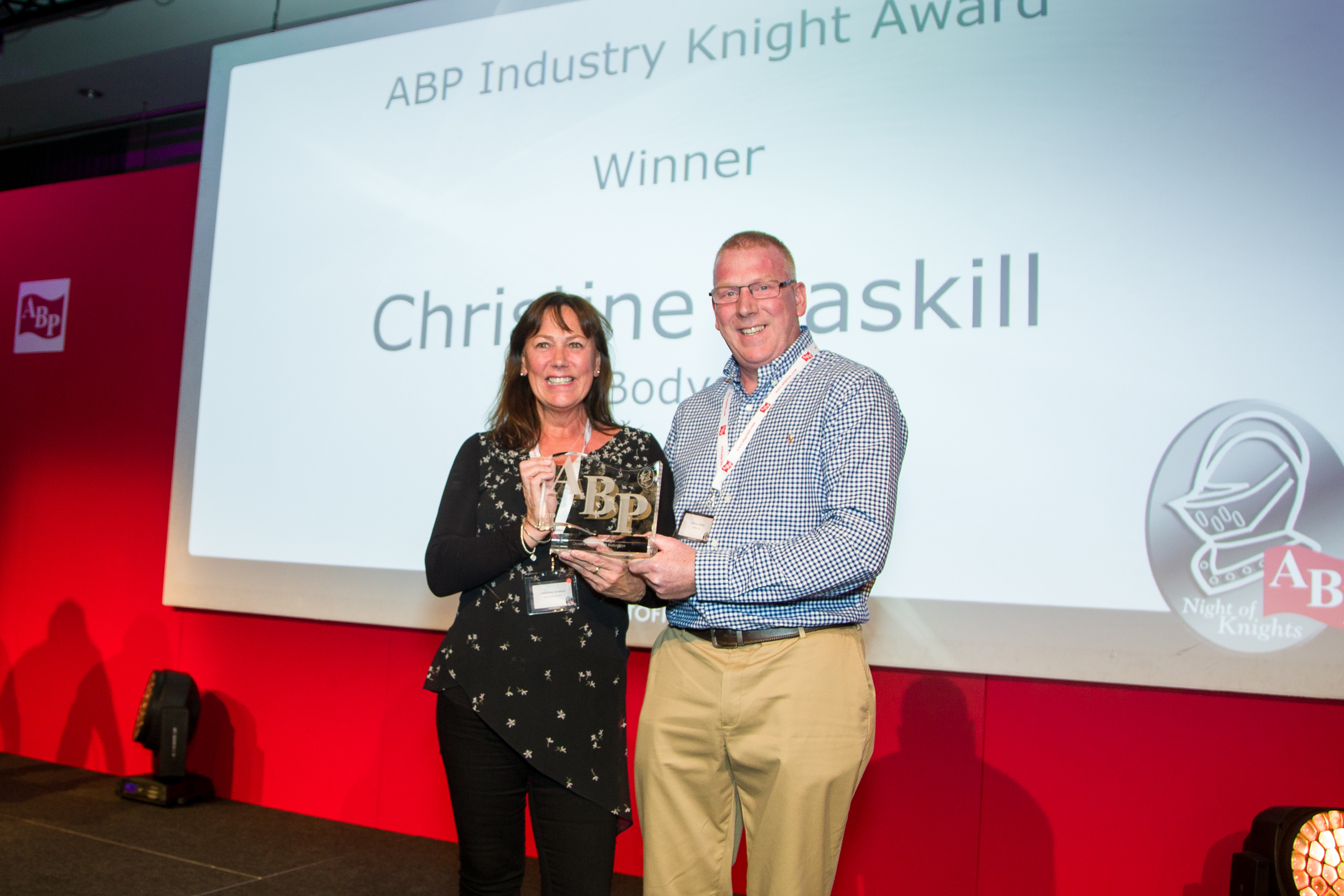 2019 has been the most amazing year for me on a personal note. It was a year of big birthdays as my youngest son was 21, my middle one 30 and I was 60 (50 really). While we celebrated with a huge family holiday my daughter announced that I was to become a grandmother for the first time next year. The Industry Knight award was an honour that I’m really proud to have received from an Industry that I’m really passionate about.

To consolidate the business and focus on profit rather than growth, to empower my staff to become the ultimate winners in their careers and to work with the Women in Automotive team to make it a group to be reckoned with, having purpose and delivering results.